January: Ahab’s wife, or, The star-gazer by Sena Jeter Naslund

March: The Immortal Life of Henrietta Lacks by Rebecca Skoolt

May: Land of Love and Drowning by Tiphanie Yanique

June: All the Missing Girls by Megan Miranda

August: The Postmistress by Sarah Blake

November: The Storyteller by Jodi Picoult

December: The Martian by Andy Weir 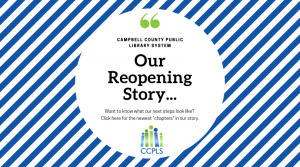 The Campbell County Public Library System is now open with some restrictions. We encourage you to continue to use …read more
View Calendar
Add

This site is made possible by a grant from the U.S. Institute of Museum and Library Services. It is managed by the The Library of Virginia Library Development and Networking Division.